When I began to identify my 50 feats, I purposefully wanted to include some volunteer activities that allow me to give back to my wonderful community. So, when I received a notice that the Heritage Park Playground Build Committee was seeking volunteers for their community build day, I was e

ager to sign up. I didn’t know much more about it other than there was a need for a large number of volunteers and that I was to wear comfortable clothes and closed-toed shoes. Since there was no call for work boots I thought it was likely safe to assume they weren’t seeking skilled labour and, as my son (who knows my construction skill level) suggested, probably needed someone to hand out water to the real workers.

I arrived at 8:00 a.m. to find vast numbers of volunteers already  registered and the playing field separated into work stations – mulch pile towering at the edge, equipment pieces ready for assembly, skids of sod ready to roll (out). We all enjoyed a coffee, then, donning our “Let’s PLAY” volunteer shirts, were assigned to our project group based on the sticker on our name tags. I was an apple and joined a group of high school seniors from Grimsby and their teacher.

At the work station we were met by some City of Niagara Falls maintenance workers also assigned to our group. Our task was to assemble two benches and a table, which sounds easy until they showed us the boards that needed to be measured, drilled with precision holes that fit the steel frames, and bolted together. They brought out the power drills, t-squares and levels; it was at this point that it became clear to me that my group assignment had been a random act in no way based upon my skill sets.

The City employees, Dan and John, seeing my obvious discomfort, and wishing to avoid all the accident forms that would surely result from placing a power tool in my hands, suggested I could paint

the railings where the new Heritage Park sign would be hung, and ensured further avoidance of potential liability by sending their colleague Corey along with me. While we painted (I did the bottom half where mistakes were less likely to be noticed), the other groups worked their magic and, little by little, the playground equipment was assembled, placed into each designated area, and skillfully cemented into place. By 10:00 a.m. I could hardly believe the progress; It seems that 400 hands make light work.

As I talked to other volunteers throughout the day I learned more about the project. The commuity build was a joint venture made possible by a Build it with KaBOOM Playground Grant that the City of Niagara Falls had received. KaBOOM is a non-profit organization that believes the well-being of society depends upon the well-being of its children, and that all kids deserve an opportunity for active play; quite simply, Play Matters (https://kaboom.org/play_matters). The successful grant allowed the City to be partnered with Canada Dry Mott’s (and its parent company Dr. Pepper Snapple Group) who paid for the $140,000 project. In addition, over 100 employees of Canada Dry Mott’s, who were attending a conference in Niagara Falls, came out to participate in the build along with City and community volunteers.   The project would honestly have not been accomplished without these amazing partnerships.

In addition to painting, I took my turn at shovelling mulch into tarps that were dragged onto the playground. It was hard work and I was so impressed with the array of dedicated men and women who spent hours under the hot sun moving the mountain of mulch onto the equipment area.

At the entrance, another group of volunteers displayed their creative flair, painting the walkway with colourful flowers and rainbows, Canadian flags, four squares, hop scotch and snakes and ladders games.  The children from the adjacent school, Victoria Park, took turns having their hands painted and pressed onto the path, leaving their own special legacies. One beaming volunteer named Mohammed from Mott’s in Mississauga told me his day was made by a little girl who told him that she liked the fish he was painting. “That’s what this is all about and I’m so happy to be able to help” he smiled. Looking around, it was clear that everyone shared that feeling.

With more than 200 volunteers, we finished early – the whole 1,500-square-foot playground was completed in 6 hours! We were joined again by the Victoria Park children, who sang us a song, participated in the ribbon cutting, and gave each volunteer a handwritten thank you card as we departed.  Mine reads “Dear volunteer, I am SO glad that you are bilding the park. I am going to have so m 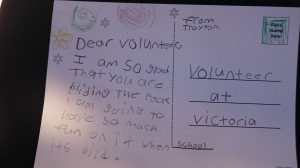 uch fun on it when its bild. From Trayton.” There could be no better payment for the day’s work than these postcards. I know that Trayton, and all his friends, will have many hours of enjoyment and, whenever I drive by, I will feel just a little bit of pride at having been a small part of creating such a wonderful playground in our community.

Next up: What does the future hold? A trip to a psychic reader. (Send me a note if you want to join me).