While I don’t play an instrument, am a little rhythm-challenged, and, as my kids can attest, cannot carry a tune in a bucket, music has always had a very special place in my heart. Good music just seems to connect directly to my soul and attending live concerts has come to be one of my favourite activities. 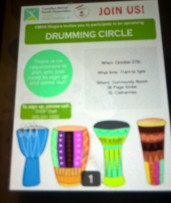 There is, however, a decided difference between being an enthusiastic audience member and participating in the creation of the music – I can feel the beat, but not necessarily keep the beat! Nonetheless, when I saw the flyer for a drumming circle event, I decided to stretch myself a little beyond my normal comfort zone by adding it as my next fabulous feat.

The drumming circle was being sponsored by the Canadian Mental Health Association – Niagara Branch and when I arrived at the location, I discovered that the majority of participants were service users of CMHA, and their service workers. Two Brock University students who had heard about the event and came to check it out rounded out the group of about 20 people.

The chairs were arranged in a circle, with a variety of exotic-looking drums, tambourines, maracas, and wooden instruments displayed in the centre.  I sat at a chair between two gentlemen who were talking to another man at the head of the circle (if there is such a thing) about musical instruments, adaptors, and other details that escaped my limited understanding. I confess I started to get a little nervous about my non-musicianship status among some clearly experienced participants. A feeling washed over me that took me back to my grade 7 music class where cringe worthy noises escaped my recorder, no way resembling “Mary Had a Little Lamb”.

I looked around the room as the other participants took their seats and was somewhat relieved to see similar expressions of discomfort on some other faces; a couple of individuals were turned slightly away from the circle, suggesting the possibility of fleeing was not out of the question. I felt a kinship with them.

Once everyone was settled, the man at the front of the circle addressed us: he said his name was Mark (Chino) and he had been drumming for over 15 years and working as a drum therapist-educator since 2005. He explained that everyone could create music, and that the workshop was about the joy of connecting with others and expressing ourselves through non-verbal communications, sharing a sacred space of trust, love and truth.  His voice was gentle and his smiling face invited us to let go of our fear and embrace the experience.

After his explanation, Mark invited us to select an instrument, but also acknowledged the legitimacy of choosing the role of listener.  Most participants picked an instrument from he middle; I selected a maraca with, I admit, a bit of trepidation.  A couple of people decided to sit quietly and observe the process – without judgment.

Over the next hour we learned a few rhythms, practiced together in unison, then in succession around the circle, first with eyes open, and then with eyes closed, using our sense of hearing to know when to take our turn.  Mark lead us, encouraged us, celebrated us, throughout. I observed the comfort within the group grow as we started to work together. One man, who had initially been an observer, decided to tap his knee as we moved around the circle. When someone suggested that we change up our instruments by passing them to the person on our left, I was happy to accept the wooden block and even more pleased to see that those who had not chosen to use instruments actively accepted those that were given to them.

At the break we had a chance to talk about the experience so far. I talked to one participant about feeling “in tune” with the group and he told me about an experiment where pendulum clocks will, over time, synchronize in an “odd kind of sympathy” to each other because of the sound pulses. It was a nice analogy for me: while we all were from different situations and perspectives, through music, we came together. The music we created was the concrete representation of the connection we had made.

In fact, the use of music for joining groups together for healing dates back to ancient civilizations.  Today, studies of music therapy have suggested that it can be used to enhance treatment for such health issues as depression by improving individuals’ moods and allowing people to engage with each other in ways that words cannot convey (http://www.medicalnewstoday.com/articles/232150.php).

In the second half of the workshop, Mark accentuated our collaborative musical compositions with drums, bamboo flute, and the haunting sound of the didgeridoo. With each new song we created, our comfort with each other increased; the smiles multiplied, formerly hesitant participants leaned into the group. I surprised even myself when I noticed that once I became lost in the music, I was also able to keep the beat.

As we concluded our session, the man to my left told me he was inspired to start playing music again; the gentleman to my right was still humming a tune as I said goodbye. I walked to my car with not just another fabulous feat under my belt, but with a sense of calm, a smile on my face and a skip in my step.

Next up: Speaking Out about mental health