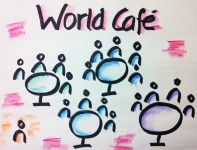 Did you read the title of this feat and think “what?” If so, you are not alone, which could have been slightly problematic since I was, in fact, one of the people who was to be doing the facilitating.

Here’s the story:  As I am currently exploring career opportunities, I have been reaching out to friends and colleagues to gather guidance and knowledge based upon their experiences. I am privileged to have wonderful people in my life who have been generous with their time and wisdom when I ask to meet and “pick their brains” of useful and sage advice. During one recent chat, a friend suggested he had a need for some facilitators for a workshop he was running and asked if I was interested. Normally I am somewhat risk averse, and would have hesitated at the offer, but, in keeping with my new 50 Feats motto, I immediately responded “I’m in!”

And so, the following week I received an email outlining the task: facilitating a modified world cafe on the topic of physician-hospital partnerships. I admit that the blood drained from my face since I was neither familiar with the format nor the topic. However, instead of finding some excuse to beat a hasty retreat, I turned to the Internet to get a sense of just what I was getting myself into. It turns out that a world cafe is an organizational workshop designed to open creative sharing of knowledge on a topic of mutual interest often used with large groups. When I understood the concept, I realized that I had facilitated numerous similar discussions during my Human Resources career. With respect to hospital -physician partnerships, I turned to the research literature and, after reading several articles, I had a general sense of the topic and its challenges.

Armed with somewhat of a framework, on the day of the workshop I tackled the next challenge – finding the venue. Anyone who knows me is painfully aware of how directionally challenged I am. However, the creation of the GPS has been my salvation and, just to be sure I would end up where I was supposed to be, I updated my maps in advance of setting out for my destination, adding a cushion of 45 minutes in the event of the inevitable missed turns, construction, and potential parking challenges. Much to my surprise, I managed only one wrong turn, and was parked, oriented and settled well in advance of my necessary arrival time.

When I entered the meeting room, I knew only my friend, who was engaged in his presentation preparation, and his partner who was also facilitating at the session.  Everyone else  was involved in the set up of tables and chairs so I jumped in and helped. By the time participants began arriving, I felt somewhat comfortable, that is, until the facilitators gathered and we introduced ourselves.  Each person said their name and a bit about their background: 36 years in organizational development in a hospital setting; former hospital administrator and current consultant for the healthcare sector; nurse educator with 25 years of experience…I admit to feeling somewhat intimidated, but, when it was my turn, I told them of my 25 years in university administration and my almost completed Master’s degree related to coaching and mentoring.  I looked around and was relieved to see no horrified or dismissive expressions or questioning of my lack of hospital experience – first hurdle overcome.

We were assigned our tables and questions that would form the basis of discussions; I was thankful that I had done my research since my groups would be working on the possible format of a hospital-physician partnership agreement. I introduced myself to the participants as they arrived and was feeling relatively comfortable about my ability to get through the next two hours.  That is, until the final individual took his seat at my table – he was the hospital CEO. Yikes! I took a deep breath and reminded myself that he was simply another participant, and I was an experienced facilitator.  I also remembered the advice of one of my early career mentors: whatever happens, act is if it is what you planned because no one else knows any different.

The next couple of hours moved along quickly.  I facilitated the discussions and recorded a summary of the dialogue for the first table, then recapped and continued the process for two subsequent 20 minute sessions as the table participants shifted to the left giving everyone a chance to answer all three of the questions being considered.

I was even able to connect with a couple of the other facilitators who suggested we stay in touch regarding our interests and consulting opportunities as we were interested in similar kinds of work and research.

As I walked to my car at the end of the evening, I felt quite buoyed by my accomplishment.  Instead of second guessing what I might have done differently as I often did in the past, I took the time to just feel good about my performance. I reflected back on the feats I have completed so far and realized that each time I stretch myself a little more doing things that interest me, I broaden my skills, experiences, and comfort with taking the next leap; this is what Dr. Barbara Fredrickson identified in her broaden and build theory of positive emotions (http://www.ncbi.nlm.nih.gov/pmc/articles/ PMC1693418/). My positive psychology experiment is in full swing!

Next up: Time for some more musical fun – Flash mob ahead!