When I had the opportunity to go to Kauai, I began to think about all of the potential feats I could accomplish there: a helicopter ride, learning to surf, hiking down canyons, and ziplining over treetops.

The first morning, as I sat on the patio poring over the brochures of various activities, I noticed one of the Hawaiian geese, nene (pronounced nay-nay), walking towards me. The signs on the lawn warned that the nene were nesting nearby and the male birds were extremely protective of their territory, so I was a little nervous.  But, the bird just came up on the 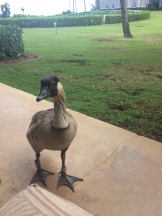 patio stone and settled in next to me. I thought it was likely that other visitors had fed him before, so was sure that he would get bored and move away when there was no food coming his way.  I was wrong. Each time I came out on the patio, Ralph, as I had named him, not only came over to sit with me, but RAN over as soon as the door opened. I don’t know if birds smile, but if they do, Ralph was. One afternoon he brought another nene with him.  In hindsight, I think it was his mother and it is possible that in bird-terms we are now married.

As we made our way to the various points of interest on the island, I found pleasure not only in the beautiful sights, but also in the unexpected encounters.  At the Wailua Falls (they used these for the opening shot on Fantasy

Island for those old enough to remember that show), I laughed as the man selling jewelry in the parking lot chatted with his friend, Oscar, a wild boar, standing just a few feet away. I swore I saw Oscar wag his tail upon hearing his name (this, I later found out, was true; pigs actually do wag their tails like dogs when they are happy). Once again, it is possible that food might have been involved in this friendship.

As the vacation unfolded, I felt less and less inclined to shoehorn a whole host of activities into each day.  I decided that this particular feat would not be about a particular adventure, but a reminder to slow down and see the wonder in the every day.  Okay, I recognize that a beautiful Hawaiian island is not ord

inary, but that simply reinforced my point. I felt the Universe once again trying to make sure I got the message by sending me a sign – literally.  And so, I did as the fish advised: I enjoyed morning walks listening to music, occasionally singing and dancing as the mood hit me, taking in the glory of the sand and the water; I sat in the sunshine and admired the trees blowing in the breeze; I marveled at the million dollar view from the balcony of the St. Regis hotel at sunset that was free to anyone who came to have a look. And I reflected on how incredibly fortunate I was no

t just to have been given the opportunity of this trip, but for all the many blessings in my life. As 2016 fast approaches, I look forward to the chapters ahead for me, big and small.  I end 2015 with a better understanding of myself, and my priorities in life.  Wishing everyone a very happy, healthy, and prosperous (however you define it) New Year!

Next up: It’s a surprise – since I haven’t any idea what it might be yet!