For people who live in Niagara Falls, Clifton Hill is a place visited only when visitors come and want the whole Falls experience; otherwise, we generally avoid the crowds and traffic as much as is possible. That was, of course, before I took on my 50 Fabulous Feats adventure.

Every year in January, the awesome attractions on The Hill participate in a charity day in support of Cystic Fibrosis research.  This is the 28th year that certain activities can be enjoyed by local residents for only a loonie. So this year, when I saw a posting online 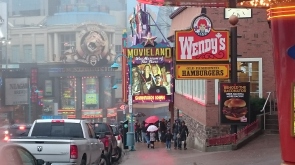 advertising the day, I decided to get in on the fun. I enlisted my older son as my companion for the day (his younger brother was too overwhelmed with course assignments to accompany us – at least, that was his story).

I confess that I may have also had to offer a Falls Manor breakfast as incentive in order to get my son on board. We were on the road to the Falls by 10:30 as I wasn’t sure what what the crowds would be like. The weather fluctuated between drizzly and downright pouring rain so I felt confident that few people would be making the trek. I was wrong.

We turned into one of the large public parking lots on Clifton Hill and joined the line of locals who also chose to brave the elements for some cheap fun. When I gathered up my umbrella, I discovered it was only half functional, but it was enough to fend off the majority of the rain, so it was perfect for me.

There were already long lines forming at the various attractions. Fortunately for us, I get sick on any kind of 3D ride, so we didn’t head in the direction of those most popular rides. Instead, I had my heart set on the Movieland Wax Museum. Thankfully, the line was short and my son was lulled into a French Toast coma and so didn’t balk at my choice.

Within a couple of minutes, we were to the front of the line and exchanged a toonie for tickets for both of us. It was as silly as I had anticipated with wax figures of everyone from Clint Eastwood to ET, Cary Grant to Jim Carrey. We walked through the winding aisles and giggled like kids as we took pictures with “the stars”  – I even got to hug Homerand sit on the couch with the whole Simpson family.

After we came out of the wax museum, the rain was still coming down, and the crowds started to cause a little anxiety for my son, so we solved both concerns by going into the building that housed Boston Pizza and the dazzling Rock ‘n Roll Bowling Alley. Although bowling wasn’t part of the dollar days, we were the only patrons and decided this was our next adventure. As a kid, I fondly remember my cousin Anne and I used to regularly go to the downtown Brampton bowling alley, but it had been a really long time since I had thrown a bowling ball ( yes, thrown is, in fact, the accurate word when it comes to my bowling prowess).

We rented our stylish shoes, and I picked the lightest ball I could find (which still felt ridiculously heavy) and let the games begin. I admit to smittenly trash-talking upon my first strike, but soon was humbled by throwing at least as many gutter balls as those that hit any pins – inconsistent would be the appropriate characterization of my game. Nonetheless, I still gloated about my 2 point win – 101 to 99.

When we returned to the street, the crowds had increased, and we mutually decided that lunch rather than another attraction was our preferred course of action. While we ate our food, I watched the array of people walking up and down The Hill. There were families with small children awed by the experience, couples hand-in-hand gazing lovingly at each other, groups of teenaged boys trying to look cool, and packs of teenaged girls trying rather unsuccessfully to ignore the teenaged boys. They all made me smile and realize that Clifton Hill was pure fun no matter your age.

As as we left to return to our car, I stopped at a one of the dinosaur displays to strike a 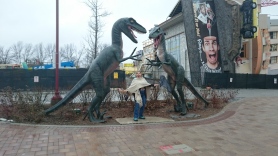 pose, defective umbrella at half mast as if it had battled the giant lizards à la Jurassic Park. Another feat accomplished, another novel experience under my belt.

Next up: it’s as much a surprise to me as it will be for you!