Some people just make me smile.  Just thinking about my friend and mentor Pauline has always made me happy – the wonderful memories of working and playing together and the ability to create new experiences with her.  Last year, Pauline suggested that we participate in a “Feats with Friends” adventure by going to a cooking class together.  As

Pauline spends half the year in Mexico, we postponed our feat for her return and last weekend, we travelled to Strewn Winery in Niagara-On-The-Lake for a day at their cooking school.

For anyone who knows me, cooking is not my forte. Okay, that’s probably an understatement; my kids would tell you that if it isn’t burnt, Mom didn’t prepare it. Pauline, on the other hand, is a great cook and she enjoys her time in the kitchen.  However, among other traits, Pauline and I share a complete lack of coordination. When we worked together, everyone knew that Pauline was not allowed to have scissor for real and good reasons.  Turning us loose on a kitchen with giant knives and multi-bladed food processors was going to be a decidedly exciting time!

We arrived at Strewn early and spent time catching up.  A couple joined us a few minutes later and introduced themselves:  Wayne and Carol were from Kincardine and the cooking class had been a gift from Carol’s workmates upon her retirement.  We easily fell into conversation with this lovely couple.  Others began arriving shortly thereafter and we were soon invited into the preparation room where we all received aprons and nametags.  Our teacher for the day was Jane who, along with her spouse Joe, had founded the winery and cooking school twenty years ago. She was bubbly and fun from the get-go and all the students immediately adopted her attitude; I knew immediately that this was going to be a lively day.

After a few opening comments, Jane introduced us to the menu: grilled butterflied pork tenderloin with Niagara fruit salsa; herbed whole wheat couscous; wilted spinach; mixed greens with herb vinaigrette, toasted croutons, tomatoes, and parmesan; poached cherries with wine syrup.  We would prepare the meal, and then enjoy it together, paired with Strewn wine.   I confess that the menu seemed a little beyond my cooking scope, but I was confident in Pauline’s skills. I was also more than pleased when we were

instructed to select another pair as our work station partners; of course, we chose the lovely Carol and Wayne.

Our cooking experience was intertwined with friendly conversation, lots of laughs, and, dare I say, even a few cooking tips: using a spoon to peel ginger; the best way to cut a pepper; how best to remove the silver skin from pork tenderloin. With each measure, cut, and stir, the efficient Esther whisked away (pun intended) the used instruments and returned them clean and ready for the next step.  We all commented on how much better cooking at home would be if we had our own Esther there.

Lest you think our morning was all work and no play, part way through the class we have a snack break after preparing a lemony lentil spread with mint that was freshly picked.  Each group of four prepared their own version and taste-tested the various outcomes on crunchy sweet potato crackers and accompanied by a yummy Strewn wine.  Pauline’s addition of a little more tahini (which I learned is made of sesame seeds) made our team’s spread the definitive winner!

Throughout the class, Jane would gather us together at one of the workstations and demonstrate a technique, then have one of the students replicate her instructions. My turn came when we were pitting cherries (I suspect that Jane chose a relatively danger-free task for me after observing me as I tried to chop ginger earlier in the day).  As I pressed the pitting device, the stone flew one way and the cherry arched over my work station and onto the floor; I quickly tossed it into the garbage only to be “schooled” on how a quick rinse was all that was necessary to ensure we made the most of the last cherries of the season. 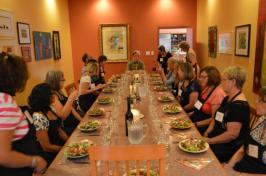 With most everything prepared, we sat together at a beautifully set table to enjoy our salad with its fresh mixed greens, expertly cut tomatoes (I did that!), and crunchy just-toasted croutons (that was all Pauline).  Joe joined us and provided a description of the wine as well as some general pairing principles (such as, the “heavier” the food, the more full-bodied the wine).

With a little more cutting and mixing, we were ready to grill the pork.  With the “ding” of the timer, we turned it; with the next ring we plated it, and tented with foil to reabsorb the juices.  The only thing left was to make up our plates before we sat together agai

n to enjoy the fruits of our labours. By now the conversation was flowing and we commented on how wonderful the meal and the company was.  Outside the glass panels of our dining area, visitors to Strewn peered longingly at our succulent fare. Joe again provided us with information about our wine pairings as well as some history of the

We completed our meal with our poached cherries topped with fresh whipped cream.  We all commented that this was a meal that we felt we could make at home, albeit without the efficient Esther it would be more of a chore to clean up.  Although I confess that Pauline did the lion’s share of the work, I did feel just a little like an actual cook at the end of the day.

As we prepared to leave, I gave Wayne and Carol my contact information and promised to share my blog with them.  The pictures that accompany this feat have been graciously provided by Wayne.  I believe that this feat ranks as one of my favourites – it involved food, friends, fun, and was well and truly fabulous.

Next up: Facing the Empty Nest