In the course of 50 Feats I have had the pleasure of finding out about interesting and informative events taking place in my own community.  This week’s activity came to me from the City of Niagara Falls.  The description invited me to “join the City’s Official Historian, Sherman Zavitz, for a walk into the past as you explore parts of Queen Street, Erie Avenue, Park Street, Zimmerman Avenue, Cataract Avenue, and Bridge Street.”  I quickly filled out my registration form and looked forward to a Sunday afternoon stroll through Niagara Falls.

The day of the event I arrived for the 1:30 start time. I wasn’t sure of the potential interest in the event and, honestly, had envisioned the potential of me and the historian on a personal one-on-one tour. I was pleasantly surprised when I rounded the corner and found about 50 people milling around the stairs of the Queen Street City Hall.

This was a feat that I decided to do solo with a view to meeting some new people while learning about Niagara Falls history. As we waited for the tour to begin, I began talking to Ann.  She was carrying a shopping carrier and began to talk to me about Rosbergs  and showed me the plastic bags she would distribute as part of the tour.  She told me about going to the department store after her music lessons as a girl; she described how old Mrs. Rosbergs acted as elevator operator and kept all the young shoppers in line.  What I didn’t realize until later was that Ann was Sherman’s wife, supporting him in the presentation and throughout the tour.

After a few minutes, Sherman stood at the top of the stairs and began our tour with a description of the Clifton Town Hill that housed the area’s butcher shops.  We started a slow stroll towards our next destination and I fell into conversation with a woman who told me she had been a bookkeeper at Rosbergs before it closed. She also shared her fond memories of her time at the store.  During the presentation, one of the Rosbergs’ grandsons who had come specifically for the tour, also contributed to the conversation.

At each stop in the tour, we learned about the various buildings, railroads, shops, and hotels.  There was the bank where a famous robbery took place:  the culprits rented the building next door and tunneled though to the vault over several weeks at night, taking almost a million dollars back in the early 1900’s.  They were caught because of a liquor bottle left behind; buying liquor required a recorded name and address upon purchase and the police found the robbers in Montreal, at the very address they had provided.  Just as informative were the two older women who giggled as they told me about their experiences with ordering alcohol “back in the day.”  They said that they had to order food with their alcohol and described the “cardboard sandwiches” that came with their drink order; under no circumstances would they ever touch the sandwiches.  We all laughed together as we walked to the next site. 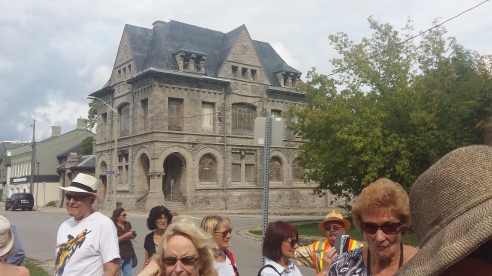 Our next stop was the old post office in Niagara Falls.  It’s claim to fame was its inclusion in the Marilyn Monroe movie Niagara, where she was filmed walking up the stairs.  A beautiful old building, it was under some renovations; one woman said that she thought she had seen a person in one of the upper windows – a worker or someone from the past?

We finished our tour by the Niagara Falls bridge.  Sherman talked about how the railroad had spanned th

e United States and Canada over the years.  While many of the hotels had closed or burned down over the years, he described the bustling business that had been part of the core of Niagara Falls in its heyday.  For me, it was a beautiful reminder of why I am a proud resident of Niagara Falls. One of the participants asked if our guide had written any books about the area and, with a humble smile, Sherman told us there were a few.

As we completed our tour, I made my way back to my car, feeling happy about the people, places, and things I had learned more about during the afternoon.  When I got home I found Sherman’s Niagara Falls Historical Note with its vignettes about the city and its people.  Another successful feat for the history books!

Next up:  Behind the Scenes at the Niagara Falls Museum