The Niagara Falls History Museum was the site of my latest feat.  Located in the old

Stamford Town Hall on Ferry Street, it received a 12 million dollar renovation in 2012 in order to properly preserve and house its more than 26,000 artifacts.  I am embarrassed to say that in all the years I have lived in Niagara Falls, I have never visited the museum.  When Culture Days advertised a behind the scenes tour, I decided it was time to check it out.

Since my older son, Christian, had been having some challenges with his mood as is not uncommon as Fall sets in, I gently cajoled him into accompanying me in order to change up his day by being around, but not overwhelmed by, a few other folks.  When we arrived, we met a lovely woman who was at the welcome desk.  As Maja had us sign us up for the tour, I told her about my positive psychology experiment.  She asked if I did mental health-related training and shared that it would be especially helpful for museum front-line staff who regularly encounter individuals presenting with unusual behaviours and other challenges, possibly related to ongoing mental illness.  I talked about a presentation for the Welland Public Library staff that I had participated in with Canadian Mental Health Association workers and suggested something similar could be arranged.  We exchanged i

nformation, and Maja said that she would talk to her Manager and get back to me.  It was only when I began to write this blog that I realized the Culture and Museum Manager is someone I know through his wife and mother, both of whom I worked with at Brock University.  Once again, It seems to me that the Universe has chosen to send its intentions my way.

While we waited for the tour, Christian and I browsed the War of 1812 gallery.  Given the opportunity to don a coatee and hat, and brandish a musket, I dutifully hammed it up for the camera.  It made my kid laugh too, which was a good thing.  Returning to the reception area, about 8 other people were waiting as Christine, our

guide, joined us to begin the tour. We were quite a heterogeneous group: Christian and me, several middle-aged women, an elderly couple, a Dad and his young daughter.  Christine took us to the elevator and we descended to the basement storage area.  She explained to us that their recent renovations had allowed the museum to properly store the variety of pieces – from ploughs to chairs to pictures to taxidermied animals and birds.  My favourite was Skipper, a dog born without front legs whose owner had fashioned a wheeled apparatus so he could get around on his own.  After his death (from natural causes we were assured), the owner, who was a taxidermist, mounted both Skipper and his skeleton, which were preserved for future generations like us to see.

Christine explained that for years the museum had collected items with an emphasis on breadth rather than depth.  As a result, many of the artifacts have little history attached to them.  The mandate now is all about “telling the story and preserving the ongoing culture and history of Niagara Falls.”  Later, in the War of 1812 exhibit, she illustrated this

concept using as an example a small scrap of material that became part of the collection.  Through research and enhanced preservation techniques, this piece of crumpled uniform was restored and identified by the type of wool and buttons used to be that of an officer; a further investigation found two officers who had died in this battle.  This item now tells its important and personal story to the visitors of the museum about the War of 1812 through a real soldier’s exp

When Christian asked Christine about her favourite artifact, she shared another significant element to the museum’s content: it’s not just about old items; the culture and community of Niagara Falls encompasses both old and new and is meant to tell the story for generations to come.  Christine enjoyed the materials associated with the da 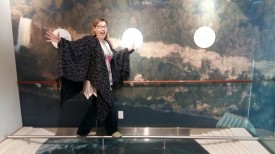 redevils, including  Nick Wallenda’s 2012  walk “over the mighty Niagara Falls” as is captioned in the signed poster displayed upstairs.  I gravitated to an interactive exhibit that allowed visitors to try their own hand (or more appropriately, feet) at traversing the Falls on a tightrope. My silly antics again received laughs from the boy, who was easily coaxed into taking my picture.

As we arrived back in the lobby area, we again saw Maja who reconfirmed her interest in connecting about mental health training in the future.  We also picked up brochures advertising upcoming activities at the museums including a community yoga series and a Fall film series (programmed by another former Brock colleague, the amazing Joan Nicks).  As we left, Christian commented that he was surprised how much he had enjoyed the afternoon and expressed interest in checking out the yoga program as well.  For my part, I happily noted how anecdotally we had demonstrated the idea that novel, intentional activities, laughter, and social connections can have a positive impact on one’s mood.  Another Fabulous Feat successfully completed, with a dash of mental health education sprinkled in for good measure.

Next up: Open Late at the Welland Canal Centre