After my recent adventure at the Niagara Falls Museum, I was excited about having a little more culture with a dash or two of fun this week.  My work friend (having passed FabFeats initiation with “flying” colours as my zip line compadre) suggested that we check out the final night of Open Late at the St. Catharines Museum and Welland Canal Centre.  The advertisement promised food, music, and the opportunity to participate in “audience-led museum tours as co-curators” for the reasonable price of five dollars.

Our evening began on a comical note as I waited patiently on a bench outside for her to arrive, only to discover some time later through email texting that she had entered through a side door and was already inside, thinking I had been held up in getting there.  Fortunately, almost as soon as we met, they were announcing the first Museum Secrets tour was about to begin.

We found ourselves among a small group of women gathered around a young tour guide named Adrian.  He was just about to start when I recognized one of the participants as someone I used to work with at my last job.  We had a mini-reunion while the tour guide waited patiently.  He then began to explain our awaiting adventure.  The tour would consist of five items, each with two distinct descriptions, one of which was the truth, and one a ruse.  Our task was to determine the correct story.  Adrian told us that

we could not ask him any questions (or at least, that if we did, he would provide no answers) and there was no touching any of the objects.  With this segue, he noted that one of our group members had located the first mystery item by resting her purse on it while she took off her coat.  With a little laugh, and a touch of embarrassment, she withdrew her purse and Adrian asked who might like to read the first description.  My friend stepped up immediately and told us that the big yellow metal object was, in fact, a buoy that had been in the waters of the canal. Or was it?  The next story told of a war time air raid siren.  We looked closely at (but didn’t touch) the item for clues as to its actual origin.  Someone commented on the black hose at the bottom; another suggested the heavy metal did not look very buoyant.  Adrian just smiled and lead us to the next mystery item. 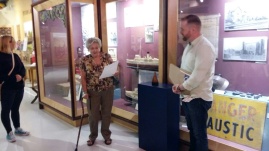 For the next 30 minutes we weaved our way through the museum, studying an early 1900’s picture (does it depict rum runners or canal workers?), a wooden cone that opened into tiny parts (a model of volume or the conical portion of an eye?), a pair of glasses (to whom did they belong?), and a travelling chest (while it turned out not to belong to an unlucky seafarer who was on board not one, not two, but three vessels that ended in tragedy – including the Titanic – the story itself turned out to be true).  During our travels, we developed a kind of camaraderie as we shared our

thoughts and had a few laughs along the way.  As we came to the final stop, Adrian recapped our items and possible provenance.  The group then chose based on our best sleuthing skills; the majority of us correctly answered four of the five, with only one woman not tripped up by the sneaky positioning of the glasses beside the Lightening Fastener exhibit causing us to wrongly select Gideon Sundback as their owner.  Before we departed, Adrian had us all raise our right hands and swear to maintain the “mysteries” of the evening and reveal nothing to future participants.

Next up was dinner.  A food truck  sat out front advertising its British fare; Ello Gov’na promised “smashing good nosh” including bangers and mash that my friend decided upon and a roast beef in Yorkshire pudding sandwich that called out to me.  We took our yummy food to the back of the museum and chatted while we watched a ship travel through the canal as the sun began to

As the evening cooled off, we made our way inside to await the evening’s musical entertainment: Beth Moore Music.  We spent a some time wandering around the various exhibits and had a little laugh each time we heard Adrian taking his next group around for their “mystery tour,” feeling a little smug about knowing the answers, but staying true to our oath of secrecy.  By the time Beth took the stage, it was past 8:30 and I admit to feeling just a bit old as I calculated how late I could stay and still get the requisite sleep needed to fire on all cylinders the next day at work.  She began with a couple of songs on her own, before being joined by two young men on percussion and keyboards.  They were very good and I noted that it was too bad there were

not more people in attendance.  I particularly enjoyed Beth’s explanations of the background to her various lyrics; for me, it really is all about the story.  Reluctantly, my friend and I slipped away after a few more songs in order to make our way home before too late an hour (which, I might add, is definitely different at 51 than it was at 21!).

As I drove home I realized that this event marked my 48th Fabulous Feat.  Stay tuned for the next couple, my SilverLiningFrog friends, as they promise to dazzle and delight.